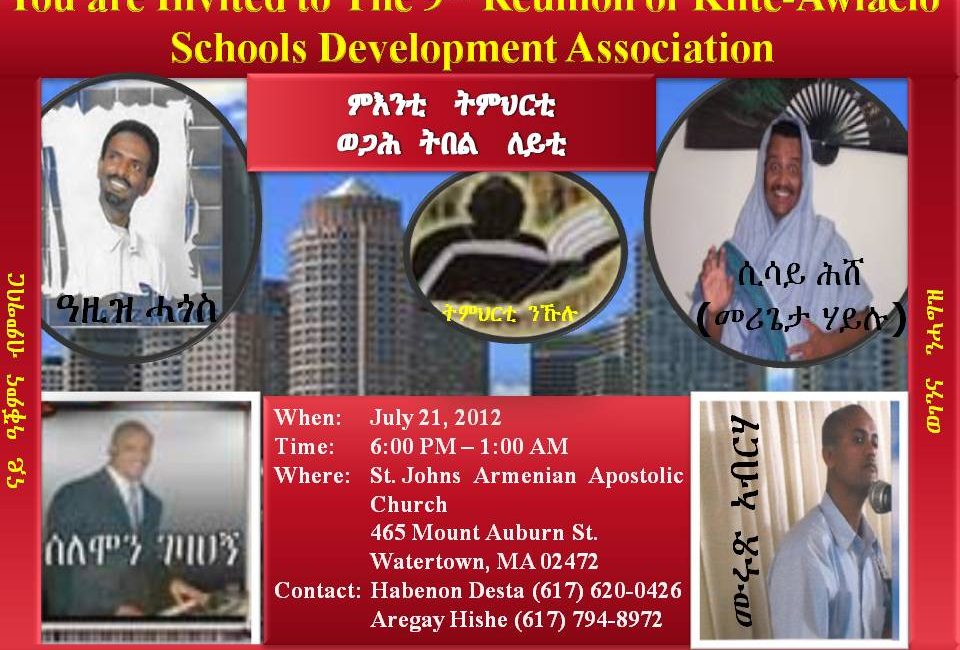 Kilte-Awlaelo Schools Development Association successfully celebrated its 9th anniversary in Boston, MA on July 21, 2012. The Boston and Maine brothers and sisters were well prepared for the success of the event. Members who flew to Boston to attend the event were also well prepared. Most members rented their own cars from the airport which helped to reduce the burden of transportation on the hosting city brothers and sisters. The time they were going to spend to transport members used it to coordinate other activities of the event. And that strategy worked perfectly.

As we do it every year, this year’s reunion was also celebrated all weekend long. The celebration began on Friday night and continued all the way to Monday morning. Most members arrived in Boston on Friday night and left on Monday morning. And the days in between were celebrated not only by awlaelowyan but by many tigrian/Ethiopian brothers and sisters who live in the great city of Boston and its surrounding.

As usual, our reunion began with the annual members meeting on Saturday around noon. We had discussed issues that concern us all equally. The general assembly decided to take all necessary measures to strengthen the quality of education in Kilte-Awlaelo. The other major agenda of the meeting was to relief the long serving board members and elect new board. This topic was not well taken by the general assembly. Most members did not want the election to take place. They want the serving board to continue. However, the old guard insisted on taking a break and all but four departed from the board. The four remained in the board are Tewelde Girmay & Nigisti Mizan from Las Vegas, Mitslal Girmay from the Washington, DC area, and Mulugeta Atakhlti representing Canada. Other new board members were elected to replace the ones who departed from the board. These are Dr. Abebe Atakhlti, Genet Atakhlti, Haileselassie Zeresenay, Haftu Hishe, Tsehsye Kahssay, Askalu Gebretekle, Ataklti Habenom, and Asret Gebreselassie. The board members have not divided their responsibilities yet and we still do not know who is going to assume what responsibility. But we will let you know when that is in place.

The fund-raising event was on Saturday night. People started coming at 6:00 pm. By 8:00 pm, the event hall was almost full. And by 10:00 pm the hall was crowded and all seats were taken, there was not a seat vacancy all night long. The people of Boston did not come to the event to dace. They came to show their support to our association and to help the students of Kilte-Awlaelo schools by doing their share fare. I say this with confidence because I witnessed how they opened their minds and their wallets individually and collectively. I wish I can thank all by name but they are so many and I do not want to miss any of them. Therefore, I like to say thank you Boston in general. However, I cannot pass without mentioning the name of the following person. I admire this person’s commitment and determination not only for the success of this event but also for the success of the association in general. This person is the young and the talented brother Ataklti Habenom. What is unique about him is that he is an American kid. He did not go to any of the Awlaelo schools. But his mind is set to help the Awlaelo students. Those of you who attended the event, you saw his presentation. He was begging the people to support KASDA. Not only that but also promised us to do anything ask of him to strengthen the association and to help the students of Kilte-Awlaelo schools. Hence, I thank him sincerely for a job well done and for his commitment to continue working for this Nobel idea.

I did not get a chance to participate on the picnic on Sunday afternoon because I left Boston on Sunday morning, but people who participated informed me that the picnic was wonderful. On this day, I missed the food, the fun, and the recognition Award ceremony that was held for the first time in KASDA’s history. Thank you Boston and KASDA members in general for the certificate of recognition. This award is not mine, or Abraha’s, or Haileselassie’s only, it is ours. Without you, three people alone could not do the marbles job we have done together. Therefore, this recognition Award goes to all of us KASDA members.

Last but not least, Kilte-Awlaelo Schools Development Association would like to thank the people of Boston in general for helping us morally and materially and our members in particular for working hard for the success of our 9th reunion.

I am looking forward to seeing you in Las Vegas next year.